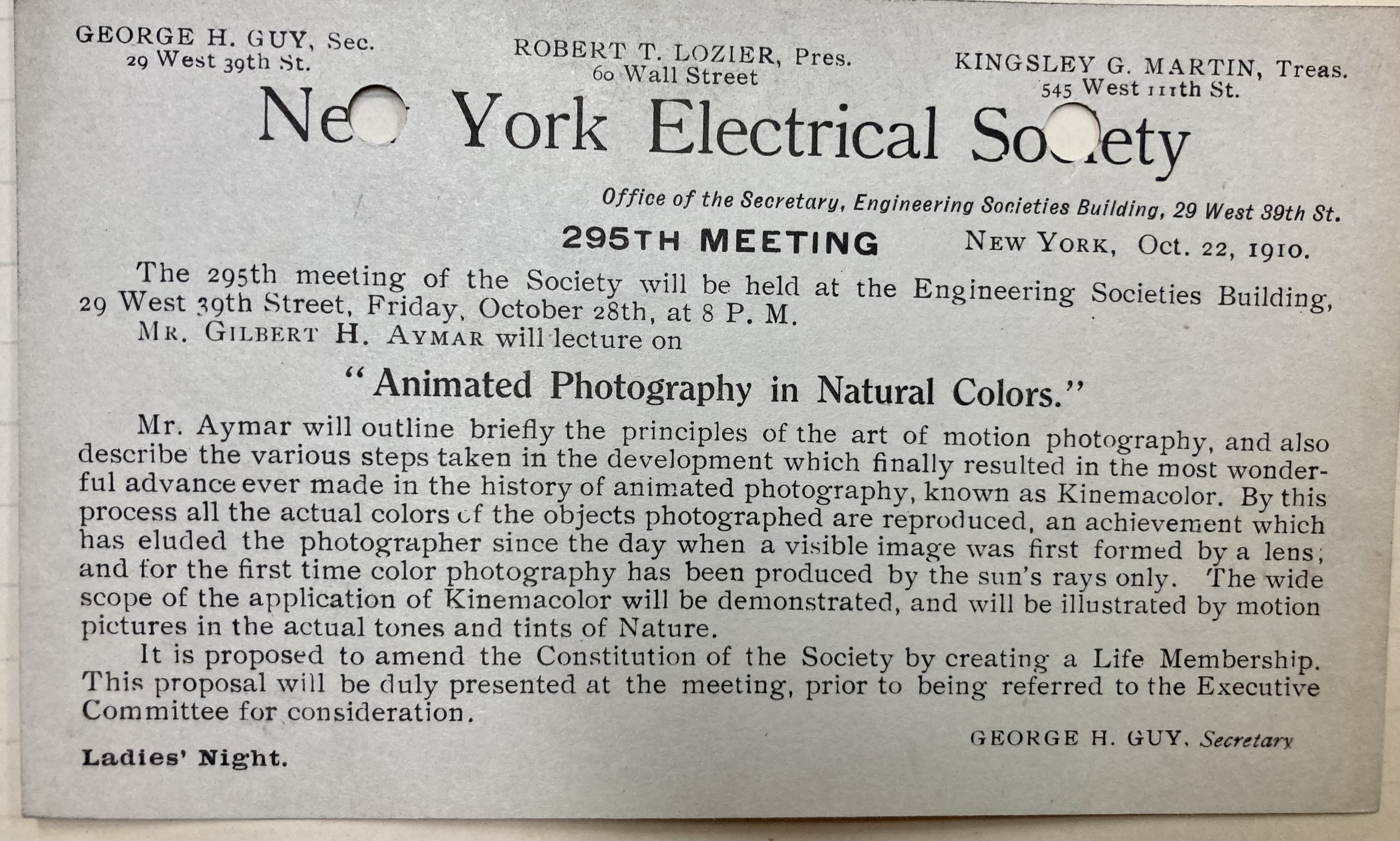 "Anyone who does not believe that flowers have souls would have been convinced at the meeting of the New York Electrical Society. There on the moving picture screen were shown flowers opening up from bud to maturity, smiling and nodding their heads and opening their vari-colored leaves to the sun. In colors, too. Not in the hideous pigments of the ordinary hand-painted films, seen occasionally in the moving picture shows where the heroine's hair changes color half a dozen times in five minutes, but flowers tinted with all the glorious coloring of nature, roses of deepest red and butterfly flowers that opened their pink eyes to the magic of the clicking machine..." - Buds Blossom in Natural Hues on Picture Screen, St. Louis Post-Dispatch, October 30, 1910

This proof of floral souls was the first public demonstration of color film in the United States, and the 295th meeting of the New York Electrical Society. For over seven decades the Society hosted event like this, ranging from a visit to Thomas Edison's laboratory, to a demonstration of a "colorscope designed to match colors much more closely that the human eye," to a tour of Penn Station ("80,000 electric lights altogether"). These events were typically open to the public, and were frequently covered by newspapers all over the United States, whose reporters marveled - color film! - or mocked, like a Time reporter who wrote that the sodium lightbulbs on display at a 1933 meeting made the attendees looked like "jaundiced mummies." 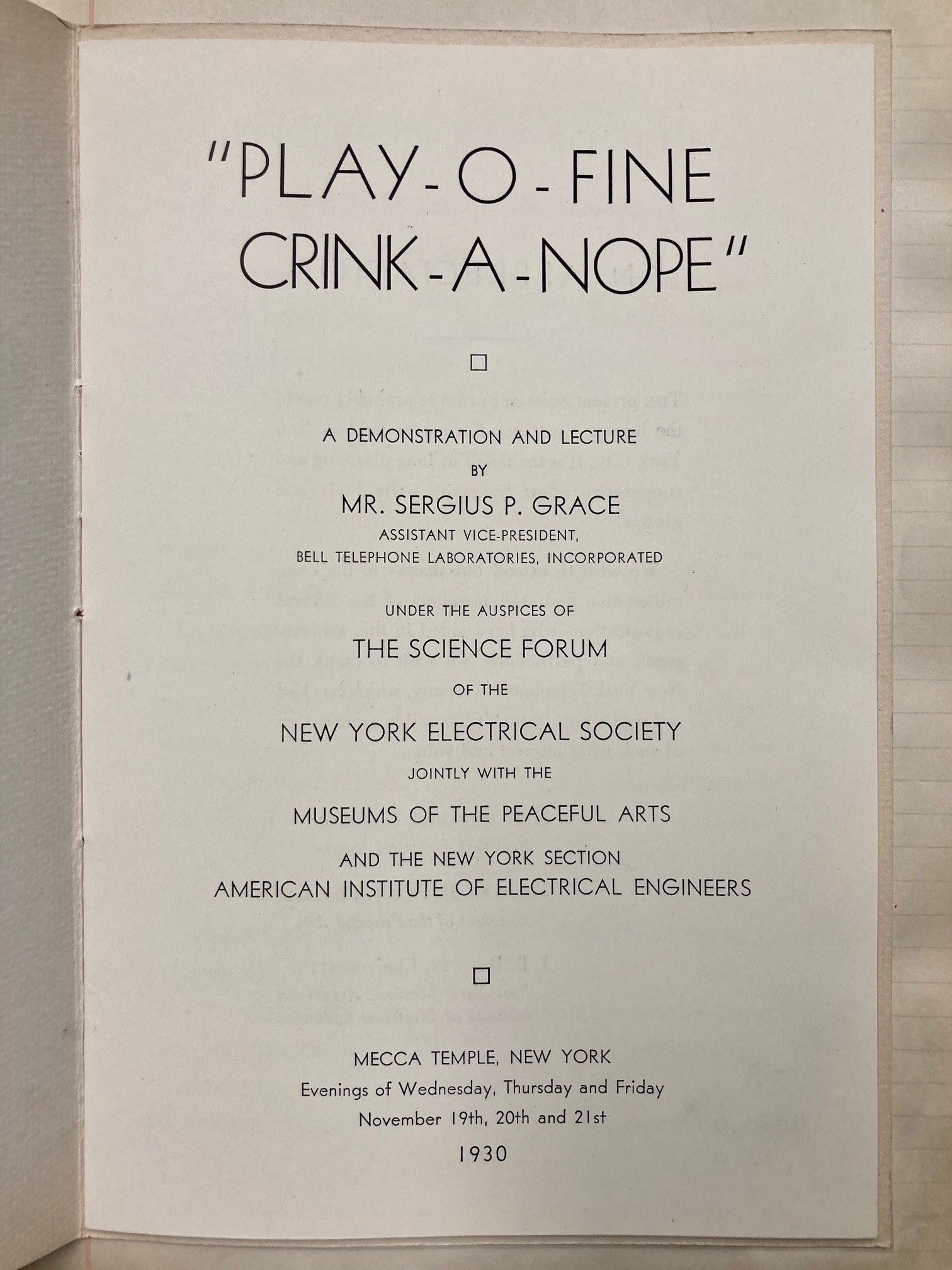 The New York Electrical Society was founded in 1881, when the very idea of electricity - much less the job title of "electrical engineer" or "electrician" - was still new, strange, and suspect. "Electrical experts before 1900 were acutely conscious of their lack of status in American society relative to other professional groups,"  writes Carolyn Marvin in When Old Technologies Were New: Thinking About Communication in the Late Nineteenth Century. Job listings in the field were typically vague, with the most salient skill being the ability to keep up with the latest developments - Marvin quotes a 19th century ad for an "Experienced Electrical Engineer" as seeking someone "well up in Electro-Mechanics, good at experimenting and technical reports."

It was in this unformed  professional arena that the New York Electrical Society developed as a means of giving electrical workers and enthusiasts a group to gather with and a space in which to learn. For a while in the 19th century, this space happened to be The Cooper Union. And while the Society would eventually move their events to the brand-new-in-1907 Engineering Societies Building on 39th Street, their strong ties to Cooper would remain in the form of leadership overlap: Gano Dunn, President of Cooper from 1935-1950, and George Bateman, Dean of the Engineering School from 1933-1948, both served as presidents of the New York Electrical Society.

This is how The Cooper Union Archives ended up with the records of the New York Electrical Society: decades worth of meeting minutes and event announcements that reveal the evolution of the Society from a small group focused solely on electricity to an established organization whose events featured the latest and greatest in many areas of science, and regularly drew crowds of "approximately 850." This evolution tracks with the growing attraction to and excitement around new technologies in the late 19th and early 20th centuries, setting the stage for the world we live in today.

Interested in learning more? View a guide to the New York Electrical Society collection on the Archives website. If you'd like to view particular materials, please reach out to us at archives@cooper.edu.

Cooper Union Degrees and the Evolution of Higher Ed
From Jabberwocky to Jello, the Publications of Cooper Students
Experiments with Electricity
What was the Greenback Party?
IOUs and Genius Pigs: Getting to Know the Cooper Family